Reaching climax: On the top of the Manali-Leh route

To sum up the rides before and after Pang, I can just say that while it was all thrill before Pang, it was sheer joy after that. In a hindsight, one can say that all troubles are marked just to reach Pang, Leh is a cakewalk after that. But having said that, Pang to Leh is also about the climax of a astonishing journey and crossing milestones, one after another.

Reaching Pang! Read: Where whisky and brandy are ferocious nallahs!

Changing landscape, as we move higher up towards More plains

After the restaurants and dhabas at Pang, as you move ahead, we leave the army transit camp on one side (Read: Thrill of being at highest transit camp in the world). Although Pang itself is over 15000 feet in altitude, we immediately gain height further for around five kilometres. That’s when we reach More plains, a plateau of enormous proportion at this altitude. Criss-crossing this plateau is a road unthinkable at this altitude and better than many of our city roads.

Ghost on the way! Read: Loops of the haunted!

Looking back towards Pang from the road

Towards right on the vast expanse of the plateau

Road taking directly to Tanglang La and further to Leh

It is an expressway at altitude of 4800 metres, more than half the altitude of Mount Everest. This is almost 50 kms of flatlands between Pang and Tanglang La pass. Flanked by mountain ranges on both sides, this plateau is good enough for dozens of football fields. Amazing, breathtaking and serene, this is a place like no other on this planet, and perhaps one of the most beautiful road journeys in India.

An inhabitant of the plains welcoming a stranger in me!

This is a long and at times, monotonous drive. You will find no village or habitation on the way. Only persons you meet will be fellow travellers going to or returning from Ladakh. Except for some riders stopping here and there for the photo-ops you will find everybody enjoying the speed.

I had an interesting experience while on this stretch. I had just crossed roughly about ten kilometres, when I found a group of bikers coming from the lake stranded on the road. One of the bike had a flat tyre. They were trying to get it repaired, but were somehow not able to do. I stopped to enquire. I was carrying a new spare tube with me. I handed over my tube to them. Although they were a bit reluctant as I was travelling solo and was still on my onward journey. But I told them that my bike had puncture resistant seal in both tyres and I expected that to work fine for me, as it had so far. Moreover the route ahead till Leh was supposed to be perfect. They even offered me the cost of the tube, but I laughed them off and after a few handshakes moved on. That was one of the satisfying moments of the trip, nature makes you more and more humble in its lap.

Just before Debring in More plains is the diversion to Mahe and Tso Kar lake.

Continue this journey further, enjoying the vista until we reach Debring towards the fag end of the More plains. Debring is a BRO depot and now also has a well-developed dhabas and campsites for travellers to have food and stay on the way. There is also a diversion just before Debring for Leh via Tso Kar and Mahe. Tso Kar is a high altitude lake famous for its wild ass and white sand. Many travellers will take this route to cover Two Kar and Two Moriri lakes in either their onward or return journey, instead of making a trip to and fro Leh.

Lot many things on different boards, but nothing to tell that where this road goes!

After crossing 50 kms of More plains, we again start to climb and this for the last time before reaching Leh. Still ten kilometres are left befor Tanglang La- the highest point on this Manali-Leh route.

Expanse of the valley before Tanglang La

I was travelling in September and at that time of the year roads were generally in very good condition as most of the snow around had already melted. But it can be tricky around July-August as snow is still there and melting, so it will not only worsen the road condition but will also make pools of water on road at different places.

The perennial trekkers moving up towards Tanglang La

Looking back from top. Two black spots are two trucks going towards Pang

Reaching Tanglang La is a huge achievement as well as relief. We know it is just downhill from here onwards until Leh on good roads. The goal seems to be nearer now. Besides there is always a feeling of accomplishment after reaching to this height.

A temple at Tanglang La, only few care to go inside.

The board marking the altitude but now many challenges to its ranking.

View from the top… you are on top.

It is often termed as Gateway to Leh. Tanglang La is at an altitude of 5328 metres (17,480 feet) and is also among the world’s top 12 highest passes. Here is the video of last five kilometres ride to Tanglang La while coming from More Plains. It’s amazing. You almost feel like on top of the world. Enjoy the fascinating views on both sides of Tanglang La.

Once we move to the other side, it is a very straightforward road. We have to go down by atleast seven thousand feet until Leh in about 110 kilometres. It is almost like going down a gorge. Roads are good and after 20-25 kilometres you feel like getting close to habitation again.

Nice to get down in sunlight

Soon back to villages

You can see villages and also electricity but will have to wait till Upshi to get mobile signals. Upshi is where we meet Indus river, cross the river through bridge and move in the Indus valley.

Some Good samaritans: Chacha-Chachi of Batal

Along the Indus after crossing Upshi towards Leh

As soon as you reach Upshi, everything changes- landscape, topography, weather, altitude and the mood. Mobile signals are back and calls are being made. You are still more than 40 kms from Leh but mind has already started working on where are you going to stay in Leh. Body seems to be demanding rest already.

Have you ever travelled on this route? How was your experience? Please do share it in the comments section below.

5 thoughts on “Reaching climax: On the top of the Manali-Leh route”

Sun is ready to take a dive in the Arabian Sea near the Elephanta Islands off the coast of Mumbai.[...]

City of Lakes- Udaipur has always been popular among tourists- domestic as well as overseas for its sheer beauty. It[...] 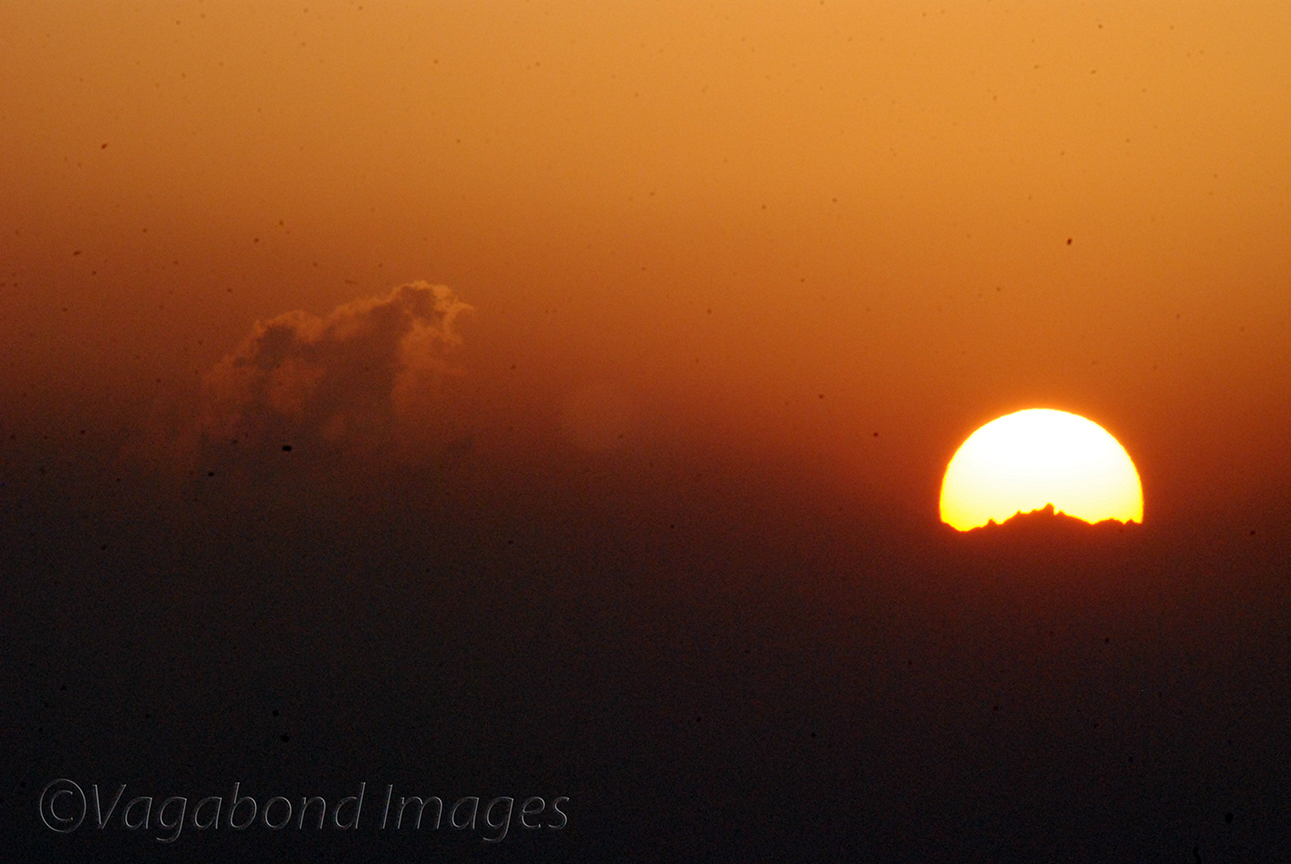 How to celebrate the announcement that my blog has been included in list of Top Travel Bloggers of India by[...]

Lockdown Chronicles Day 13! No time for peace! One would have thought that an pandemic of this proportion will bring people together. But we are divided and full of hatred like never before, even in this tough time!!
Lockdown Reads! Walking down the Agra’s necropolis, in the shadow of the Taj! New blog post alert! Walking around Taj Mahal is like roaming within different layers of Mughal history. Once you start peeling off these layers, you get to know—one after the other—many lesser known facts and events of the period which was largely overshadowed by a single story of love. Read the full post: Link in bio! https://vagabondimages.in/2020/04/05/lockdown-reads-walking-down-the-agras-necropolis-in-the-shadow-of-the-taj/ Photo credit: hiddenheritage.in
Lockdown Chronicles Day 12! In this lockdown sticking to your homes be like these plum-headed parakeets!
Lockdown Chronicles Day 11! Almost four floor high neem tree is actually a landing and resting site for most of the birds in vicinity from bulbuls to kingfishers, barbets, koels, sunbirds, parrots & et Al.
Lockdown Chronicles Day 10! Kashmiri Lily is signing off for the season. Two bulbs gave four flowers each. While one bulb has now shed the dried up flowers, four flowers on the second bulb are also now in their last days. Oh, Kashmir, I am already missing you!!
Lockdown Chronicles Day 9! With the pigeon pair abandoning the tree right opposite to my balcony, camera action now shifts to Neem tree next block and this Brown Headed Barbet keeps breaking the lockdown silence with its constant kutruk… kutruk...
Lockdown Chronicles Day 8! Contemplating next move! With the nest finally gone, the pair left the tree and landed on other while thinking on what to do next. How tough is it to loose your home of labour and move to a uncertain future!
Lockdown Chronicles Day 7! Shaky home! Today the male was not getting twigs from outside, instead he was busy arranging the ones already there. But the nest was already looking fragile and the couple seemed to be playing a lost game!
Lockdown Chronicles Day 6! Intimate moments! Pigeon pair getting cosy during nest building exercise this morning. Does this undesired lockdown gives you more chance to come near to your loved ones back home! What do you think?
Lockdown Chronicles Day 5! Its bright sunshine today! Blooming bougainvillea in the balcony reminds all things we are missing this spring- weather, birds, flowers and blue sky!