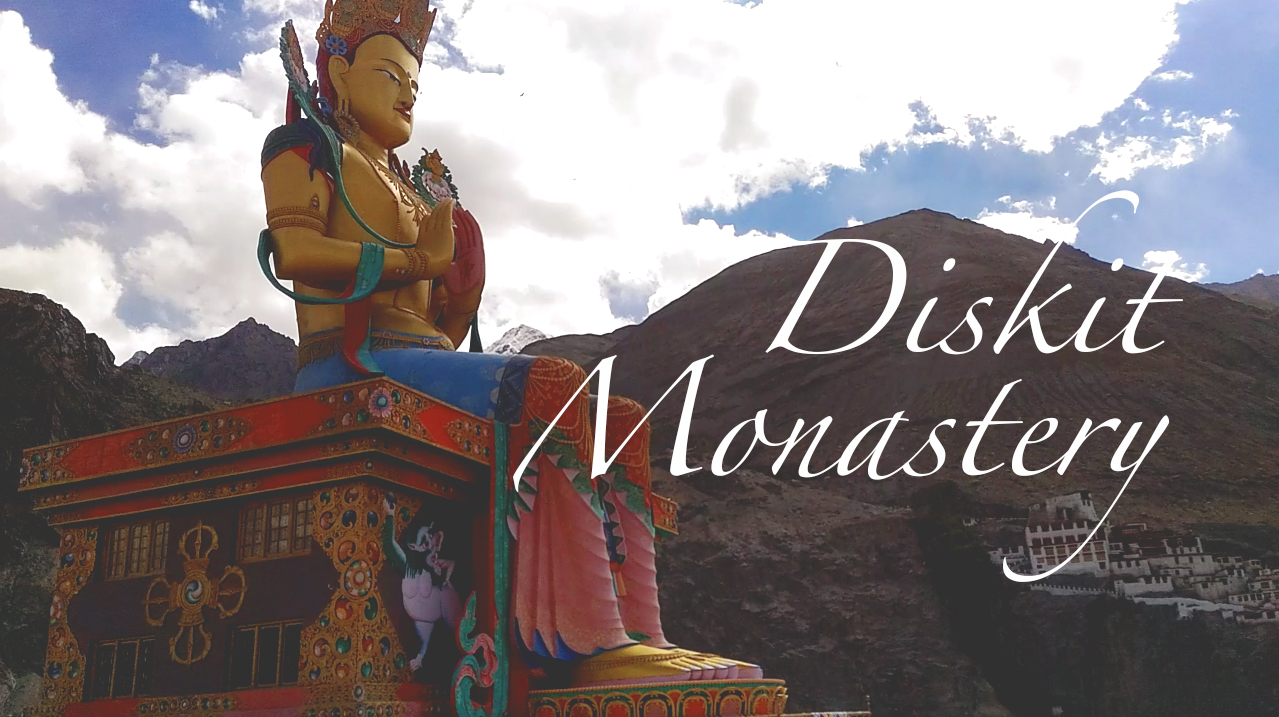 You won’t find much of a difference on either sides of Khardungla Pass, until you reach Khalsar. Here the valley widens. But still, it is only until we reach Diskit, that we get to notice the mixed landscape of sand dunes, Shyok river, mountain ranges as well as Karakoram wildlife sanctuary. Since 2010, Diskit pronounces its existence from a fair distance through the large statue of Maitreya Buddha, which is visible from a distance string on a top of a hill. Due to lower elevation and milder climate, this valley has lush vegetation and Diskit has its own healthy share of apricot and apple orchards in this oasis.

Diskit is administrative headquarter of Nubra valley. Diskit monastery is also the biggest in valley on this side of Khardungla. Diskit indeed has a very strategic location. It is on edge of a mountain, so it has a mountain on its back as a wall to protect itself. It is just around 20 kms from Khalsar from where road goes towards Shyok and further to Pangong Tso, i.e. very close to China. Other road from Khalsar goes deep into Nubra valley to Sumur and Panamik. Another 20-23 kms from Khalsar is Khardung from where climb to Khardungla starts, pass which shields Leh valley. Diskit is also at the edge of the desert. Diskit monastery can be reached via Diskit village through a dusty road that crosses a stream in the middle of the village. We can drive upto the base of the monastery, but then you have to walk up the stairs to the temples. Since the whole monastery is built on a hill it is a a bit of climb till the top.

Right in front of the Diskit monastery is the vast expanse or you may call flood plains of the Nubra valley. Right there in this plains Nubra river merges with Shyok river. Both these rivers are said to be originating from different tongues of Siachen glacier. Also famously known as the highest battleground in the world, Siachen glacier is right behind the Karakoram ranges seen from Diskit. Thus, Diskit also keeps an eye on all the travellers coming to Leh from the China or the Pakistan side, i.e. the old trading route of the Silk road.

Therefore the importance of Diskit monastery, located at altitude of 3142 metres, couldn’t have been greater historically. But at the same time, it would also have to face the brunt of all the unwelcoming visitors. Gonkhang or the protector temple at the monastery is testimony to that. Severed head and a hand of a medieval Mongol invader are still said to be kept here, as if the protector deity (Kali) is holding them. It is said that the Mongol resurrected himself, every time he was killed. It stopped only when his severed hand and head were brought to the temple.

There is a large 32 metre (106 foot) statue of Maitreya Buddha at the foothill of the main monastery. This statue is a recent addition to this place and was consecrated in 2010 by Dalai Lama. This statue itself sits on top of a small hillock. There is a temple at the base of this statue. Official residence of the Chief Lama of Nubra, the photong is also said to be located here.

This monastery belongs to different sect than the one which runs the Hemis monastery. This 14th century gompa was actually founded by Changzem Tserab Zangpo, a disciple of Tsong Khapa who founded the Gelugpa (yellow hat) order of Tibetan Buddhism. The cupola of the monastery is said to be similar to Tashi Lhunpo monastery of Tibet. There is also a fresco of the same monastery here. The historic and culturally important Tashi Lhunpo is said to have been founded in 1447 by the first Dalai Lama near Shigatse in Tibet. Monastery has a statue of Cho Rinpoche in the prayer hall. There is a huge drum and several images of fierce guardian deities. Well, Diskit monastery is said to have seen a lot of upheaval in four centuries. Lachung temple is above the Diskit monastery, but not very far. This is one of the oldest temples in Nubra valley. There is a large idol of Tsong Khapa in this temple and a Gelugpa yellow hat crowns the idol.

Finally, in mid 18th century this monastery was given to Rimpoche of Thiksey monastery and hence, since then Diskit is considered as a sub-gompa of Thiksey monastery. Monastery houses almost 100 monks. Diskit Gompa celebrated its annual gustor festival on 7th and 8th October this year. This monastery will again celebrate Dosmoche festival on 2-3 February 2019. Many lamas gather here for the festival which is marked by mask dances depicting victory of good over evil.

Also read: Khardungla might have lost the height but not the sheen!

Tip: Time your visit to the monastery carefully as some of the temples of the monastery remain closed in the afternoon. To my surprise, while there were a large number of tourists at the Maitreya Buddha statue, which is right on the road, but only a handful of them go up towards the main monastery, as it needs a bit of climb and walk. Whereas, it is worth seeing and devoting some time to understand the culture and the history of the region.

Have you been to the Diskit monastery in Nubra valley of Ladakh? Please share your experiences with us in the comments section below.

1 thought on “Diskit monastery which braved the Mongolian invaders”

How often will you be forced to leave your bulky DSLR camera just because you are not willing to carry[...]

Its Spring time, although chill is still in the air. Time of romance and enjoyment. Carnival time at places around[...]

Koel returns! And for a sip of water this time. This summer isn't going on easy for any of us!
LOVE FOR KUMAON8! Photo or painting! When you try to paint an evening sky in Kumaon, it will surely going to come out like this!!
Thirsty Barbet! With temperatures soaring to 45 degree celsius and heat wave at its peak, weather is also getting tough on birds!
LOVE FOR KUMAON7! Kumaon is a land of mystic and it has inspired sages and leaders alike! This is the place where Vivekanand stayed for over a fortnight. Now this is an important centre of #BelurMath and #ParamhansMission !
The day it would have been! Remembering what used to be this day every year. Subdued celebrations on Eid this year due to pandemic has robbed the lustre of this festival. Nonetheless, Eid Mubarak!
ITC is proud to present the '5 Star Kitchen', a cooking show, that for the first time will bring together the acclaimed Chefs of ITC Hotels to your TV screens with some amazing recipes. Don't forget to tune-in to 5 Star Kitchen ITC Chef's Special. Every Saturday-Sunday at 11 am on @starplus and Disney+ Hotstar with host @dheerajjuneja1 #ITCMughal #Agra #5starkitchenstory
LOVE FOR KUMAON6! Close proximity to mid to higher reaches of Himalayan ranges also makes it one of the best places for high-altitude trekking with some of the most iconic trekking routes located in the region!
LOVE FOR KUMAON5! Just 11 kms from Kausani, historical Baijnath town and 12th century temple surrounded by river Gomti. Kumaon is also loved for its rich history and cultural heritage!
LOVE FOR KUMAON4! Kumaon also means amazing colours of sunrise and sunset. Whether you are in front of hundreds of kilometre long Himalayan range or any of its majestic lakes, you can sit for hours together watching myriad colours of nature!
LOVE FOR KUMAON3! Spring in Kumaon is loved for its colours of blossoming flowers. If you miss cherry blossoms then you can certainly equally enjoy peach blossoms in mid reaches of Kumaon!