Guns and colours at Holi of valour in Menar 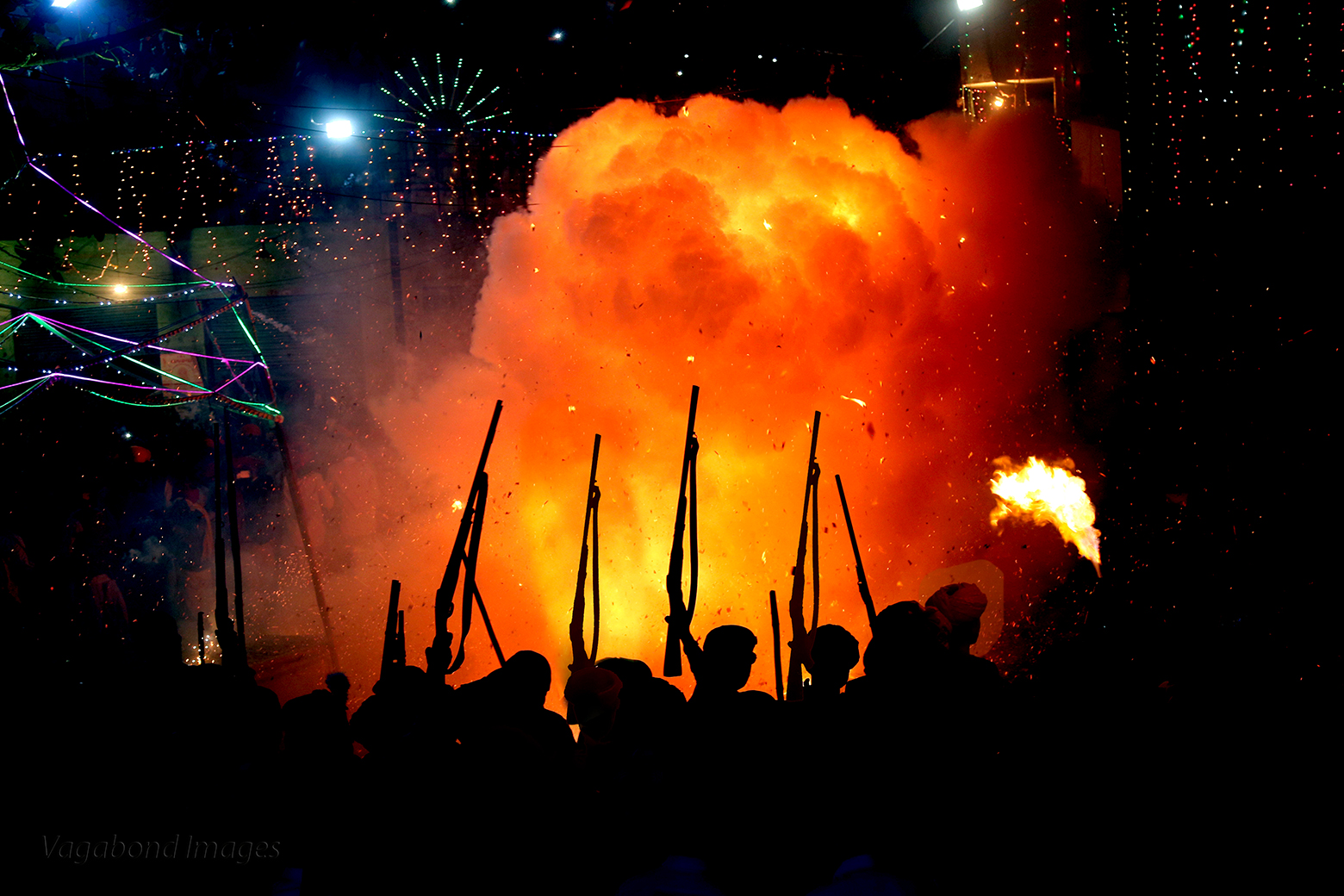 So, you would have enjoyed the Holi of colours the previous day, but another part of India is today celebrating Holi in its unique way. I have often referred to Menar near Udaipur as a Bird’s village. But I have also always mentioned that this particular village has a very unique history. So, when rest of the north India, celebrates Holi with colours, this tiny village celebrates Holi with its gunshots. Its Holi not of myth but a history of courage, a daring win.

Going by the Indian caste structure, Menar is known as a village of Brahmins. But interestingly in Mewar region brahmins of Menar (surnamed as Menarias) are also referred to as Brahma Kshatriyas, and history has big role in naming them so. On the third day of Holika Dahan and the next day to the colour festival Dhulendi, Menar celebrates with gun-powder. This day is known as Yama Dwitiya as per Hindu calendar. Yama or Yamraj is the god of death and ‘dwitiya’ is the second day. This is the second day after the full moon, which is devoted to the god of death, hence called as Yama Dwitiya. This term locally became Jamrabeej in the Mewari dialect. ‘Jamra’ is again the reference to Yamraj and ‘beej’ is the second day. Hence this festival is also known as Jamrabeej. Reason to celebrate festival on this day is that the so-called event in history took place on this day more than 400 years ago.

All man in the village will get dressed up as rajput warriors with a shield (traditional ‘khanda’) in one hand and sword in another will dance to the beats of a traditional drum (‘dhol’). This typical dance of this region is known as ‘gair’. Guns will fire the loud shots in air. The drum beats, clanging of swords and the gun shots—all will make you feel as if you are in a battlefield. And, this all is actually in memory of a battlefield. So, although Holi gets associated with different forms of colour, in Menar it brings memories of a story of courage and valour. It is often said that in India, it is only festival of its kind which is held to celebrate a victory on Mughals.

Also read: Menar again, for owls and vultures this time

No doubt, it is one of the most important day of the year for people of Menar, seemingly more important than festival of Diwali. Houses will be decorated, special dishes will be prepared. Menarias staying outside will return to their village at least on this day to celebrate it together. As, I had earlier mentioned in an article about Menarias being very good chefs, and working with celebrities across the world; so all those working in UK, USA, UAE, Oman, Hong Kong, Mauritius, Belgium or different parts of Africa, will make sure to be here to celebrate this festival. Including those who work in nearby district os Rajasthan or other neighbouring states, almost 10-15 thousand Menarias will reach here for the night of Jamrabeej.

Tradition of this festival goes almost 420 years back. On this day the main Omkareshwar square will be decorated with lights. Whole day, a drummer will keep beating the drum. In the afternoon, around 1 pm, a red carpet presented to the village by the kings of Mewar will be put at the permanent platform at square. Representatives of 52 villages of Menarias will get dressed up in traditional costumes and assemble here to perform a ritual of initiating the festival.

In the night five oil-lit torches will be carried from this square to five different streets. Around 9.45 in the night villagers dressed up as warriors and carrying firearms will gather in five groups on these five streets. With the torch leading each group, all groups will then move towards the square and while doing so, they will keep firing shots in the air. Others, with swords in their hands will keep them clanging. Just before reaching the Omkareshwar square, all groups will simultaneously fire the shots in air and there will be a huge show of fireworks.

Thus a battlefield will be re-enacted. Young ones will try to show their valour, elders will keep singing couplets to encourage them, priests will try to calm everyone them—all as a part of ritual. Then, people from Jain community sprinkle the colours of Holi on everyone and things will get quiet. The festival so far will seem all by and for the men, but then women of the village in their most beautiful traditional costumes will sing traditional songs of bravery and go to cool the fire of Holika which was ignited on the evening of Holika Dahan.

That will mark the end of the battle, but not the festivities. A traditional village jester will recite the local history. There will be another show of different set of skills and thrills by the young ones at the village square. Lot of singing, dancing and merry making. This is festival of the whole village, and all communities take active part in it.

Also read: Going to Udaipur! Don’t miss on these 10 things

This festival is said to be celebrated in memory of that historic event, when few young warriors from Menar village took arms against a unit of Mughal army stationed nearby and in a lightening guerrilla attack defeated them. This attack was planned in a meeting held at the same Omkareshwar square in the village. This happened in early years of 17th century, immediately after the death of Rana Pratap of Mewar and when his son Amar Singh was the ruler. Mughals have been making inroads in the Mewar and they had blocked many transit routes thus creating shortage of supplies to the villages. This desperation prompted the attack by people of Menar.

There are different versions of how the actual attack and the resulting fight took place. But it was impressive enough to have even moved the Mewar King Amar Singh who, as a sense of gratitude to the Menar village, gifted them a royal red carpet, a war drum from Nagaur, were given right to wear a feather on their traditional headgears (which was very exclusive that time) and were designated as 17th Umrao (Mewar until then had only 16 umraos, counties of top level) of Mewar. They were also freed from paying any tax to the king of Mewar and this continued till the independence in 1947.

This all makes Menar a fascinating visit. There is nature, there are birds and there is a history and tradition. It’s a unique Holi altogether. So although it is already too late to be there for this year’s Holi at Menar, but do keep it in your mind for the next year if you are interested in witnessing some unique cultural event rooted in deep history.

All photos by Umesh Menaria, a resident of Menar village near Udaipur in Rajasthan and a part time reporter and photographer by profession.

Have you ever been part of any such unique Holi festival in India? Share your experiences with us in the comments section below.

Life is not easy, especially if you are in armed forces and posted at a high altitude, far and away[...]

They might be most less talked about animal, when it comes to Ranthambore- we talk about tigers, crocs, monitor lizards[...]

On a full moon night, in a clear lit sky you can mistake it to be a calm sea. Such[...]