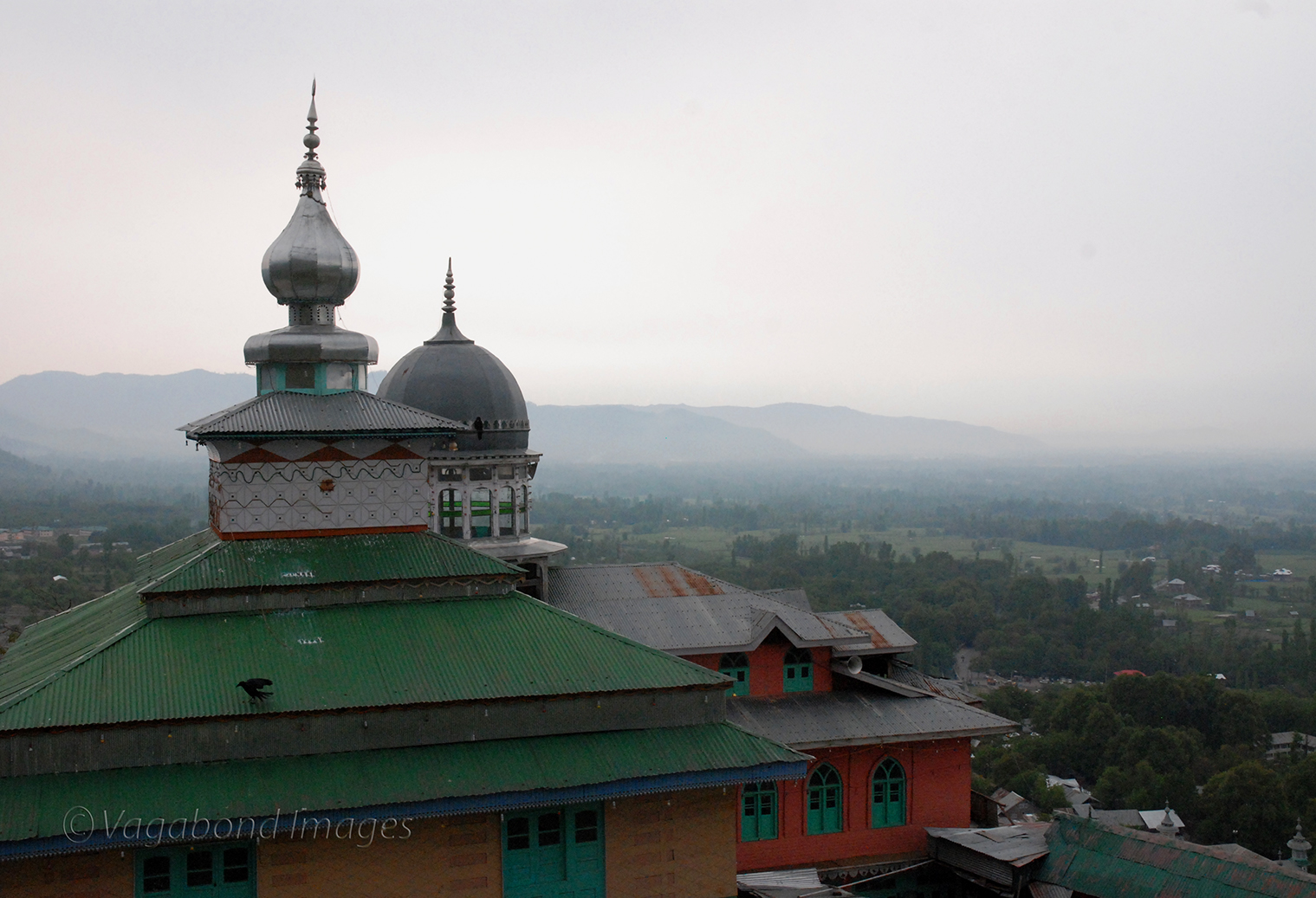 I visited Aishmuqam Shrine near Anantnag in Kashmir valley for the first time years before the Salman Khan starrer Bajrangi Bhaijaan was shot in 2015. This Bollywood superhit film did lot on its part to make people aware of this place. A very beautiful song sung by Adnan Sami was filmed here. The song was inspired from a very old traditional qawwali and it is said that it was for the first time that a film was granted the permission to shoot inside the premises of the shrine.

Mosque and shrine of commonly known as Saint Sheikh Zain-Ud-Din Wali at Aishmuqam is considered to be one of the most famous dargahs of Kashmir. One needs to climb 560 steps before you can enter the shrine which is located about 40 minutes away from Pahalgam. We came from the Pahalgam side and to be honest, when I went there for the first time, I had not heard at all about this shrine and once there, I actually felt embarrassed about it. The friend who took me there was a Kashmiri Pandit himself. But, even after the popularity of the film, the tourism to shrine has not taken over as someone would have expected.

A symbol of communal harmony, inter-faith existence, peace and shared heritage of Kashmir, the shrine of Hazrat Zain-ud-Din Wali is situated on a hill lock, about 20 Kms. before the famous hill resort of Pahalgam. The mausoleum is located inside a deep cave atop the hill, about 100 meters high than the main road. Village Aishmuqam is very well known in every part of Kashmir because of this historical shrine. Sheikh Zain-ud-din lived in the 15th century and was one of the principal disciple of well-known sufi saint Sheikh Nur-ud-din, the leading Reshi of Kashmir. It is also said in Kashmir that Sheikh Zain-ud-din, was known by the name of Zia Singh and was a prince belonging to the ruling Rajas of Kishtwar.

Zia Singh’s father Yesh Singh, the then Kishtwar ruler, is said to have been assassinated when Zia Singh was only 13 years old. (Reshi Naama, by Ghulam Mustafa Shah, ancestor of the  Shahs of Aishmuqam, writes about Zain ud Din Rishi as a highly revered folk hero who was son of Jaising, the Hindu Rajput ruler of Rukan, a principality near Bandarkot in Kishtwar, named Zia Singh or Zaina singh at birth. His father got killed by the enemies when Zaina was a small kid, so Zaina was brought up by his mother.) Zia Singh is believed to have been suffering from some disease which took a serious turn leaving no chance of his recovery. Sheikh Nur-ud-din is said to have passed through Kishtwar just at that time and having heard of his miraculous performances, Zia Singh’s mother begged the Sheikh to visit her son and pray for his recovery. The Sheikh agreed but on a promise that Zia Singh would meet him in Kashmir after his recovery.

However, as the legend goes, Zia Singh did not keep his promise. As a result, after sometime he was again confined to bed. His mother kept on crying day and night until she had a dream about her unfulfilled promise. She then promised again that she would fulfil her obligation this time if her son would recover. With the restoration of his normal health, Zia Singh proceeded to Kashmir to meet Sheikh Nur-ud-din. The mother and the son undertook the hazardous journey from Kishtwar to Bumzua, a village about 8 miles south of Aishmuqam, where Sheikh Nur-ud-din was staying at that time. Zia Singh was named Zain-ud-din and his mother as Zoon Ded. Zain-ud-din formally took oath of allegiance to him in the Reshi order and was left in the care of Baba Bam-ud-Din Reshi.

Among the local inhabitants the legend goes that Zain-ud-din meditated for a long time in village Mandjan of Tehsil Sopore where he attained spiritual perfection. It was at this stage that Sheikh Nur-ud-din advised him to migrate to the cave at Aishmuqam and to meditate there for the remaining period of his life. On his arrival, Sheikh Zain-ud-din found the entrance to the cave blocked by snakes, cobras and scorpions. It is said that the saint carried with him a club which he had received from his master. Seeing the serpents he placed the club on the ground and it was instantaneously transformed into a dreadful cobra. The snakes in the cave got awestricken and not only surrendered to the Sheikh but also vacated it and migrated to the village Phuurpujan which is about 16 miles to the east of Aishmuqam. After cleansing the cave Baba spent many years here in stern meditation surviving only on dry wild walnut kernels.

Zain-ud-Din Reshi led a life of great simplicity and always spread the message of social equality. The exact date of the death of the Saint is not known, but it is said to have occurred sometime in the year 1440-41. There are many stories related to his life as well as death. He was given a symbolic burial in Rozabal Aishmuqam where the 24 graves of his closest disciples lay aside his grave. His urs or anniversary is, however, being celebrated on the 13th day of Baisakh (falling normally in mid April). Some people say that this was the day when Sufi saint entered the cave for the first time for the purpose of meditation, bearing a torch to guide him. On this day congregational prayers are held which are attended to by no less than 20,000 people.

The devotees celebrate the occasion by burning ‘Mashals’ on the hillocks. But beyond the festive torch celebrations lies the riveting legend of the place and the event. The age-old tradition of burning Mashals—called Zool in Kashmiri—is followed by religious processions. People in large numbers, irrespective of religion, caste and creed, gather inside the vicinity of the shrine to pay homage to the saint.

There’s a very interesting story behind the custom of burning Mashals every year on this day. According to the another legend, the festival on this day has been happening from pre-Islamic times and dates back to about 2,000 years. Many centuries back, as local legend has it, a demon had terrified Aishmuqam village during the rule of Ashushah Badshah. “Hardly a day passed when any of the villagers were not his prey.” Then one day, the villagers approached the demon and requested him to eat them, one by one, by their turn, as per the popular belief. “Demon agreed, but in turn, the villagers were supposed to provide him Rotis (bread) each day.”

This process continued for months. But when it was the turn of a young orphan, a Gujjar boy named Bumisad, the things took a U-turn. The boy’s turn had come the day he was supposed to get married. “As Bumisad approached the demon, he began to share his food. And when the demon asked him, not to eat his share, he replied, in a lighter vein, ‘the food I eat will anyway reach you.’ Then the boy challenged the demon for a fight,” the locals, while narrating the legend, say.

The fight continued for a week, before one night, the villagers learnt that Bumisad has killed the demon. “They could not believe their eyes as they went out of their homes carrying Mashals in their hands to find out the truth,” the locals say. “On finding the dead body of a demon and Bumisad still alive, their joy knew no bounds as they began to rejoice.” From that day,every year, the day is celebrated by burning the Mashals. “The demon turned into a snake and was then called Shahmar (head of the snakes).” Besides Shab and Zool festival, congregational prayers are also held on the occasion, where worshippers pray for peace and harmony in the valley.

Two mosques known as Khankah are also attached to the shrine. The Khankah, besides being used for prayers are also the repository of the relics of the saint which are held in high esteem.These consist of a bow, a patten, a wooden bread, a rosary, a wooden club and a copy of Quran. It is said that the saint observed fasts frequently and whenever he felt hungry he licked the wooden bread to satisfy his appetite. These relics are publicly displayed whenever the village meets with some catastrophe, such as a famine, epidemic, etc. The shrine attracts hundreds of thousands of people from all parts of the valley every year. The shrine of Zain-ud-din is respected by all communities and they actively participate in the celebration of the anniversary. There is no restriction to the entry into the shrine which is open to visits by persons of either sex and of any community.

The Aishmuqam shrine complex was built in Kashmiri traditional architecture by Sultan Zain-ul-Abidin has been improved and redesigned by different governments thereafter. Economically half the population of this township depends directly or indirectly on the pilgrim tourism. People come here to pray for their wishes to be fulfilled and they tie a sacred thread for that at the shrine. Generally followers of the Sufi sect of Islam tie such knots at shrines while making a wish. If their wish is fulfilled, they return to untie their thread. Around the shrine, a makeshift village fair of sorts crops up, with vendors setting up stalls to sell merchandise. Festival also marks the beginning of spring and the start of the sowing season. Shrine officials say that during times of drought or natural calamities a special prayer is held inside the shrine to seek blessings.

Read more in this series: Kashmir, we know less about: Kheer Bhawani at Tulmul

More such destinations in Kashmir, read: Kashmir, we know less about: Naranag

Have you been to Aishmuqam shrine during the zool festival? Share your experience with us in the comments section below.

3 thoughts on “Kashmir we know less about : Aishmuqam Dargah”