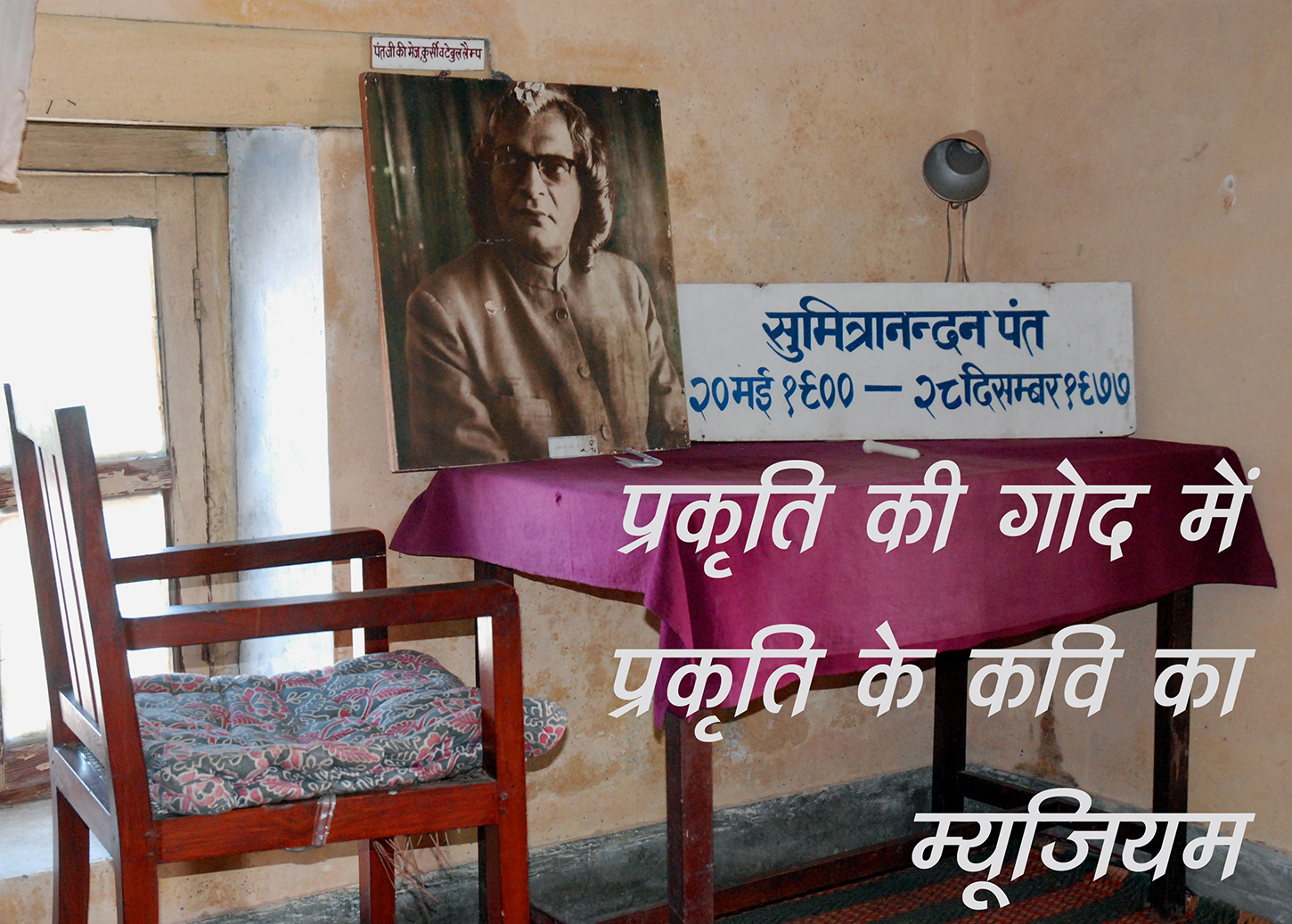 Pant museum at Kausani in Uttarakhand isn’t a touristy place as such. In my three visits to this place in the course of last few years, I have rarely seen any other tourist there. Despite, this place being in the heart of the Kausani town with just a few steps to walk upto the museum from the road head. I wonder, if even more than five percent of the tourists coming to Kausani would remember the name of Sumitranandan Pant, although surely most of us in Hindi heartland of India have read his poems in school text books.

Actually, we don’t respect our literary persons. They are the ones who guide our intellectual discourse, many of them have been leading lights for various movements but we tend to forget them as soon as we leave our text books behind. That is the reason that dedicated museums for a writer or a poet is rarity in India, specially in the north. Therefore, though not big, though not very grand or very professionally managed, still Pant museum impressed me a lot. It’s also important that he is recognised at the place, which made him what he was. Actually, it is still easy and possible at small towns or villages to remember and respect their heroes. Big cities tend to forget them pretty quickly. Even when such museums come up, it is a challenge to maintain them and bring people to them. We have seen how even birth places of legends like Munshi Premchand have struggled to keep themselves intact.

Sumitranandan Pant Museum gives us an idea of lives and times of the famous poet. This was the house where he was born and spent his childhood. The museum houses collection of his personal belongings, rare photographs, letters, awards, cloths, citations and much more. We can also have an idea of level of interactions that the literary figures of those times use to have with each other. Many of his famous couplets have been displayed there. There is also a section which has a big collection of books, written by Pant as well as his own collection of books of his contemporary writers. There is also his study table, his bed and other things.

As I said, this isn’t a planned museum, but his traditional house has been converted into a museum. Museum is controlled by the state government and there is a caretaker to take care of the museum as well as guide the people. The outer structure of the museum still reflects a traditional Kumaoni house. The fascinating part is the location of the house, which gives a panoramic view of the Chaukhamba, Trishul and Nanda Devi peaks, Kausani is famous for. The location of the house and natural beauty of its surroundings give an idea of how nature casts its spell over writings of Sumitranandan Pant.

Pant lived in a great time for Hindi literature, surrounded by equally great literary luminaries likes of Nirala, Bachchan, Mahadevi Verma, Dinkar, Jaishankar Prasad, Shamsher and many more. He was the first Hindi poet to receive the Jnanpith Award in 1968. For his reflection of romanticism of nature in his poems, he is often referred to as William Wordsworth of Hindi literature. It isn’t difficult to understand his love to nature when you are here in Kausani. And when you are here, do visit the Sumitranandan Pant museum, not just to respect one of the greatest Hindi poets of his times but also to see that how nature fuels creativity to take it to entirely new heights.

A commemorative postage stamp released in memory of Sumitranandan Pant by the India Posts in 2015 has Pant’s picture as well as a panoramic view of snow clad Nanda Devi ranges of Himalayas, as seen from Kausani, in the background.

Sumitranandan Pant museum is located right in the heart of Kausani town. You can  go down few steps while coming from the road to Anasakti Ashram or climb a few steps up from road to Baijnath. Museum is open during the day from 10 in the morning to 5 in evening. Kausani is in Bageshwar district of Uttarakhand and is 52 kms from Almora and 40 kms from Bageshwar. Besides, its Himalayan views, Kausani is also famous for its tea gardens. Besides Pant, Kausani also houses Anasakti Ashram dedicated to Mahatma Gandhi and a museum for Sarla Behen, Gandhi’s disciple.

You can also see a small video of the museum with Pant’s voice in the background on my YouTube channel by clicking on the thumbnail below.

Have you ever been to any museum for a poet or writer anywhere in the world? How was the experience? Share with us in the comments section below.

Yoga has always been part of India’s health consciousness, ages before the pomp and show of International Yoga day and[...]

Having completed the Chandratal mission, I had to be back to Leh route. So, it had to be the same[...]

It’s September. Seemingly best month to travel to Leh through this treacherous Manali-Leh highway. Best because of weather and the[...]

Lockdown Chronicles Day 8! Contemplating next move! With the nest finally gone, the pair left the tree and landed on other while thinking on what to do next. How tough is it to loose your home of labour and move to a uncertain future!
Lockdown Chronicles Day 7! Shaky home! Today the male was not getting twigs from outside, instead he was busy arranging the ones already there. But the nest was already looking fragile and the couple seemed to be playing a lost game!
Lockdown Chronicles Day 6! Intimate moments! Pigeon pair getting cosy during nest building exercise this morning. Does this undesired lockdown gives you more chance to come near to your loved ones back home! What do you think?
Lockdown Chronicles Day 5! Its bright sunshine today! Blooming bougainvillea in the balcony reminds all things we are missing this spring- weather, birds, flowers and blue sky!
Lockdown Chronicles Day 4! For the male pigeon it actually is work for home! While the female is sitting on same place since days preparing the nest, it is male who makes number of sorties one after another to bring twigs & sticks and hand them over to his lady!
Lockdown Chronicles Day 3! It drizzled today morning. This Lily was in full bloom. The bulb for this flower was brought from Kashmir some years ago and now it flowers just once a year at this time. During my lockdown this blooming Lily was as if reminding me of the lockdown that Kashmir has been through for many months!!
Lockdown Chronicles Day 2! Male pigeon was constantly at some distance today, didn't come close to his female for the whole time, till I watched them in morning. Does work from home makes life too close for comfort!!
Lockdown Chronicles Day 1! Putting camera to some work during lockdown. A pair of yellow footed green pigeon on the tree right adjacent to my balcony this morning.
Work from home be like!
Leap of faith! When it is the fear of unknown, then self-belief is the best strength... whether it is fear of height or fight with a virus!!