There would have been no Jaisalmer without Gadsisar 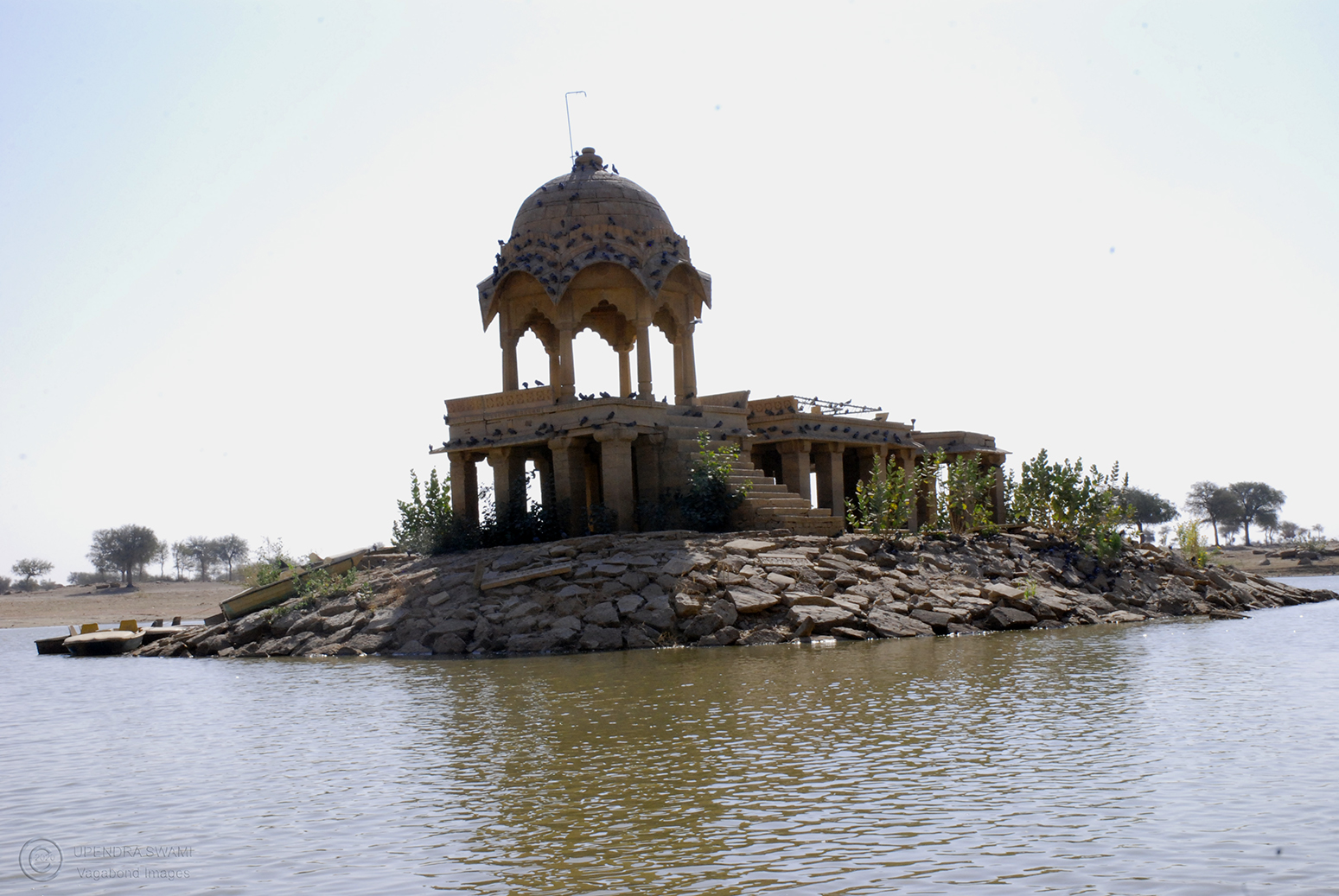 In the maps, Gadsisar Lake of Jaisalmer is said to be as big as the city itself! Besides size, it also shares most of its age. In about 800 years of the existence of the city, this lake has been there for almost 700 years, quenching its thirst! Neither of them would have existed for so long without the other.

At a glance around you can see the huge mounds of sand on the other side. Even if you approach closer, you will feel as if you have reached the edge of the desert. But, it actually is the high and long bund of the Gadsisar Lake. Moving ahead, you will find a huge arched gateway with two watch towers on either side, five beautifully carved oriel windows and one big entrance and two smaller ones on the either side of it. Moving towards the gate you will see a hue of blue across the entrances, which might look like the sky but is actually the water of the lake on the other side.

Also read: Lodurva, a temple to see and a love story for delight

As you move toward the other side of the entrance, the full glory of the Gadsisar opens up in front of you. Perfectly constructed ghats on all sides, and in between them are many temples, balconies, courtyards, pillars- beautifully carved and decorated. There is also a temple in the middle of the lake surrounded by water from all sides. All of these constructions are in yellow stone. So while, whole day there are two starkly different colours of blue and yellow here, twice in the day these colours merge- at sunrise and the sunset, everything turns golden. No doubt, that this place is referred to as golden city.

Built in 1335 by Maharawal Gadsi Singh, this lake is three miles in length and almost a mile in width. Gadsi Singh was himself active involved in the construction and will daily arrive from the fort to the construction site to oversee every work. But conflicts and conspiracies attacked him fatally one day when he was at the lakeside. His queen was supposed to become sati and burn herself in his pyre, but she didn’t and fulfilled his dream of Gadsisar.

Also read: Bada Bagh, an oasis and cenotaphs side by side

Gadsisar kept growing and growing during the coming generations. There were pathshalas (schools) as well as dharamshalas (inns); in later years Neelkanth and Girdhari temples were built and also the chowki of Jamalshah Peer, a sufi saint. It is also said that every year on the last day (of the Vikram Samvat calendar) there would be a big occasion of cleaning the lake which would be, not only hosted by the King, but he himself would be actively participating in the work. Whole city will join, as everyone believed in necessity of keeping the water bodies clean. King himself will start the work. Tradition of ‘Lhas’ kept on for centuries and Gadsisar was witness to many such eventful occasions.

There is one very interesting story about the main gate to the lake. The gate wasn’t there initially. During later years, a courtesan named Teelon arrived here from Sindh and made her base. It came to her mind that such a beautiful lake should also have a equally majestic entrance gate. Hence, on the western side of the ghats, Teelon started constructing a big gateway. Beautiful design and carving made this under construction gate the talk of the town. Some jealous minds took the whispers to the Maharawal’s ears. They asked him, whether he will enter the lake passing through a gate built by a courtesan? Dispute kept brewing as the work on gate reached its peak. One day, impatient Maharawal decided to demolish the gate. News of this decision reached to the Teelon. Moving intelligently, overnight she got a temple constructed over the top floor of the gate. Now, when the soldiers came next morning for demolition, they couldn’t have demolished a temple. They informed Maharawal about it, who then reversed his decision. Gate was  completed in full glory and since then it stays there and everyone passes through the gate built by a courtesan.

Opposite this gateway, on the other side of the lake are round watch towers. There is a small garden inside, which locals have been using for picnics and get-togethers. Another one towards east used to house the soldiers guarding the lake. Afterall, a lake which used to provide water to the whole kingdom needed to be protected, with so many enemies surrounding the region.

Gadsisar has a huge catchment area and every drop falling in that area adds to the lake. People at that time recognised the importance of every drop, hence they also kept in mind while constructing, that how to utilise water that overflows. So, from one to other and another…water kept overflowing into a series of small lakes. One might wonder but the locals tell that there was a series of nine lakes  in roughly nine miles to catch the water- Nautaal, Govindsar, Joshisar, Gulabsar, Bhatiasar, Sudasar, Mohtasar, Ratansar and in last Kisanghat. If the rains were unusually so good to have filled all these nine lakes after overflowing Gadsisar, then excess water would be harvested in small wells.

But that all seems to have vanished in thin air. Catchment area of Gadsisar now has an Airforce airstrip. new colonies, offices and everything else. Gadsisar now has many boats for tourists to enjoy fun boating in its water but no farsighted attempts to secure its life. Lake also has a good number of cat fishes and you will find people feeding them. I couldn’t get an actual account of when and how these fishes came here, but they are in big numbers. This lake also attracts a good number of migratory birds in winters.

Structures built many centuries ago on the ghats of the lake are slowly crumbling. But the lake still lives even after 685 years and will certainly live for many more. It is still providing water to all. You can see local ladies collecting water from the lake besides many came-carts as well as water tankers. They will often use generator sets to pull water and fill the tankers.

Generally all tourists coming to Jaisalmer will pay a customary visit to Gadsisar—located just two kilometres from railway station—as if no visit to the golden city is complete without this, because Jaisalmer itself is incomplete without Gadsisar. You can witness the glimpses of local life around on its ghats. Just outside the main gateway, you might find a local musician playing a ’Ravanhatha’ (a local string instrument). Its melancholy melody will just mesmerise you. You will have all these impressions of Gadsisar in your mind for ever. A lot more than memories of sand dunes to take along.

(Some of the references about Gadsisar are from Anupam Mishra’s landmark book- Aaj Bhi Kharey Hein Talaab).

Have you seen the Gadsisar lake at Jaisalmer or any other such lake in the Thar? What vibes did you feel? Share with us in the comments section below.

2 thoughts on “There would have been no Jaisalmer without Gadsisar”