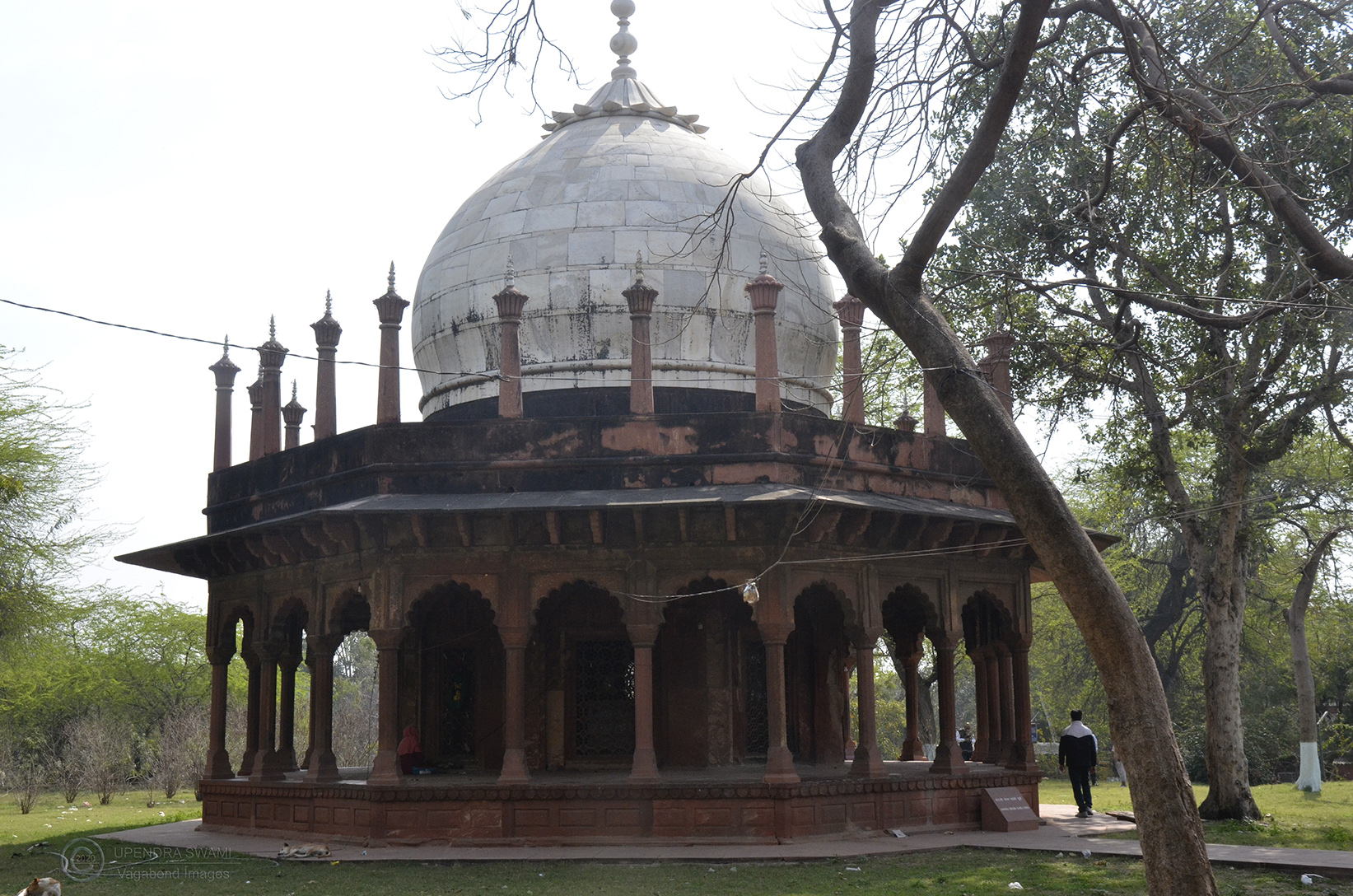 At a very remote corner just outside the boundary of Taj Mahal complex towards its Eastern gate, when you climb the narrow stairs of Sandali Masjid you get an eerie feeling. With monkeys and dogs around, what attracts you more is the presence of a big number of cats, many of them black. Sandali Masjid is also called as Kali Masjid. Mosque is at the one side of the complex, with its back towards the Taj complex across the road. While right in front of the mosque, in the middle of a garden is an octagonal tomb. Its onion shaped dome in white marble signifies that it belongs to someone from the royal family. We are told that it belongs to the first queen of the fifth Mughal emperor Shah Jahan- Kandahari Begum.

You will hardly find any tourists here. Few locals will be here, praying at the mosque or paying their obeisance to the late queen. There are no clear answers to why this mosque is named as Kali Masjid or Sandali Masjid, only few unverified guesses including colour of the mosque, colour of the cats, stairs leading to mosque and others. Garden is unkept and does not resembles in its design to other char bagh (four squared gardens) centric tombs of those times. It also misses the water channels. You will feel hard to believe that this is the tomb of the first wife of the same emperor who had built the tomb of his second wife just a few hundred metres from here, which even almost four centuries later still brings an awe to all and mighty in the world.

Generally speaking, being first wife of a king was always a privilege in terms of powers and succession, but certainly not when the second wife is none other than Mumtaz Mahal. Kandahari Begum had learned this lesson quite early in her life, she perhaps was aware of it even when she was getting married to Prince Khurram or Shah Jahan, the third son of Mughal emperor Jahangir, in the year 1609.

Khurram was already engaged to Arjumand Banu Begum, two years before his first marriage, who later on came to be known to the world as Mumtaz Mahal. Khurram and Arjumand married five years after their engagement in 1612. Hence, the first marriage of Khurram was essentially a political marriage.

Kandahari Begum was princess of Safavid dynasty, rulers of Iran, or Persia as it was known at that time. She was the youngest daughter of the great-grandson of Shah Abbas I, founder of the Safavid dynasty. Her father Muzaffar Husain Mirza Safavi was the governor of Kandahar, hence her daughter came to be known as Kandahari Begum. It might seem very unusual and annoying now, but the fact is that we find no reference of her maiden name anywhere. That was how life of most married women were during those times, especially if you are as unimportant as Kandahari Begum. Interestingly, Shah Jahan’s third wife was also Akbarabadi Begum, known so because she belonged to Akbarabad in Agra itself. Kandahari Begum herself has been also referred to as Sirhindi Begum in many references but we couldn’t find any reasons for that.

Well, Khurram’s marriage to Kandahari Begum was part of larger strategy of Emperor Jahangir to get control of Persia. So, although she was the first wife, but as was destined, she lived an obscured life largely overshadowed by the love story of her husband and his second wife. A love story, that gave world the Taj Mahal.

Kandahari Begum was not just the eldest queen, but she also gave Shah Jahan his eldest child, albeit a daughter- Parhez Banu Begum. Child was born in 1611, and if we go by the years, at the time of her birth Kandahari Begum was just 18 years old. No surprise that the care of the child was handed over to the senior most lady in the royal family, Akbar’s first wife Ruqaiya Sultan Begum, who incidentally was childless herself but also brought up grandson Prince Khurram.

So, while Kandahari Begum was the first queen, it was Mumtaz Mahal who enjoyed all the powers and even passed royal decrees as well as helped Shah Jahan in ruling matters. So we hardly know anything about state of relationship between Kandahari Begum and Shah Jahan. But what we find reference of, is that Shah Jahan loved her eldest child and before he died in 1666, he asked his daughter Jahanara Begum (his eldest child from Mumtaz Mahal) to take care of Parhez Banu Begum.

Kandahari Begum died early, around the year 1650. Taj Mahal was almost complete by the time. Two sides of jilukhana (forecourt) already had two tombs earmarked for the other two queens of Shah Jahan, none of whom had died by that time. Tomb for Kandahari Begum was built by Shah Jahan at the Kali Masjid complex. There is another story on how this mosque came into being. It is said that when the construction of Taj Mahal started, a large number of artisans, labourers had arrived there. Many of them were muslims, hence they needed a mosque to offer namaz five times a day, which should have been close to construction site. Therefore this Kali Masjid was built and thus it was the first mosque to have come up in this area. Even today, prayers are offered here three times a day.

Kandahari Begum loved cats and that is the reason given behind presence of so many cats here. Locals believe that these cats are actually spirits (djinns). Believers will come here and feed these cats with a wish in mind and it is said that if these cats eat your offerings then your wishes will be fulfilled. Makes for an interesting ghost story, isn’t it! Locals also come and pay homage at the Kandahari Begum’s tomb in traditional way by lighting incense sticks, offering rose petals and tying threads.

AGRA BEYOND TAJ : Basking in glory – Fatehpur Sikri in lensview

We walked around the tomb, where Guddu Taj and his group were reciting a sufi qawwali. Sufism had a large impact on Islam in India during medieval times. The music and the lyrics were giving us a welcome break from all the tourist chaos across the wall, and looked like as fitting remembrance to the lady who despite holding such an important position, lead all her life in a shadow. It also fits the stories of Kandahari Begum being more religious of the royal wives.

Kandahari Begum also built a garden in Agra and it was known as Kandahari Bagh. This garden is said to also have a mosque. There are plenty of references which say that this bagh also had a tomb which was built by Kandahari Begum and she was later buried there. In the same reference it is also said that this area was largely destroyed in period after Aurangzeb’s death. Later Britishers sold this land to rulers of Bharatpur and they constructed a mansion over the erstwhile tomb, which was known as Bharatpur house. But then, you can’t have two tombs and two burial places for the same queen, unless you are Mumtaz Mahal. So the structure of dome and other evidences at Kali Masjid make us believe that this was the burial place and tomb of Kandahari Begum.

AGRA BEYOND TAJ : Sheroes – A monumental zeal of human spirit

Shah Jahan also married Akbarabadi (Izzat-un-Nissa) Begum in 1617 and Fatehpuri Mahal (Begum) later. The year of his fourth marriage is hard to find any mention now, so are the details of her family and year of death of Fatehpuri Mahal Begum. We will talk about them in an another post.

The Taj Mahal has such an aura around it that for the normals it obscures everything else. For most, Agra is just about Taj Mahal while as a matter of fact, Agra was lot more before and after Taj and even during the times of Taj. There is still much more beyond Taj to be seen, experienced and admired in Agra.

Note: Our walking tour to Kali Masjid and other places of Agra was organised by Tourism Guild of Agra and curated by Shradha Arora and Shahena Khan, two Agra lovers and conservation architects, and together they initiated Sair-e-Dastan to explore, acknowledge, make aware and promote living cultural heritages of historic cities.

Do you go Agra just for Taj Mahal? Besides Taj, what have you enjoyed the most in Agra? Share with us in the comments section below!

They are often called as biggest open art galleries in the world. A village where almost every wall is a[...]

Ever expanding cities have engulfed much of the natural habitat in their surrounding areas, including the wetlands, despite knowing it[...]

Thai hand Parasols being colored and painted to be given as souvenirs at a tourism event. Advertisements[...]